Posted by Sean Whetstone on June 6, 2016 in News, Whispers 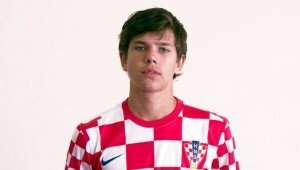 Coric is part of the Croatian squad at the upcoming Euro 2016 tournament in France but is unlikely to play in the starting XI. The 19-year-old broke into the Dinamo Zagreb first team during the 2014/2015 season and this past season established himself as a key player for the Croatian league title winners.

Coric has been likened to Real Madrid midfielder and fellow Croatian Luka Modric for his technique and impressive passing range and has represented Croatia at every youth level.

He is a versatile attacking midfielder most comfortable in the No. 10 role, but also able to operate on either wing and in a deeper position in midfield. At just under 5’8″, it is said he may initially struggle to adapt to the Premier League although he already has 80 senior appearances to his name at the age of 19.

Coric has been linked to the likes of Real Madrid, Barcelona, Inter, Chelsea, Manchester City, Liverpool and Spurs.