Posted by Sean Whetstone on January 15, 2016 in News, Whispers 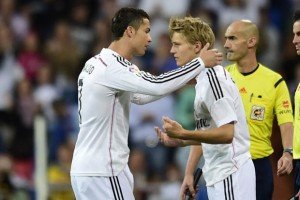 17-year-old Martin Odegaard has been linked with a loan move to West Ham on social media in recent days.

The young Real Madrid starlet has recently been linked with Liverpool with reports that Real Madrid rejected a permanent move for the promising attacking midfielder who has been tipped for the top.

Madrid’s president Florentino Perez has previously said he is adamant that the player stays at Madrid until he is ready for first-team football. Odegaard made his debut for Madrid in last season’s 7-3 win at home to Getafe on the final day of the La Liga campaign, but he has not featured for the first team this season

The Norweigan joined Real Madrid a year ago but his one run out for the club’s first-team involved coming on a substitute for Ronaldo no less. Real Madrid have been slapped with a two-window transfer ban this week, similar to the judgement passed down to rivals Barcelona although they are appealing.

Whether the ban could mean that a loan will be less likely or there is any truth in this internet rumour we don’t know but the kid looks like a future star from the same Norwegian stable as Martin Samuelson. We can all dream!