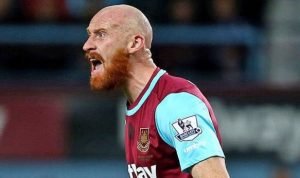 James Collins has a better than even money chance of being reunited with Angelo Ogbonna in the Irons team for the match against Burnley at the London Stadium tomorrow.

The veteran defender has been suffering from a tight hamstring but reports are that he is more likely to make it than not for the crucial game before  a two week break.

Both he and Oggy were ruled out from last weekend’s game against Swansea as the Hammers boss David Moyes to stitch together his threadbare resources at the back.

However, the signs are hopeful for tomorrow with Ogbonna recovered from illness and Collins on the mend although there remains a slight doubt.

However, Declan Rice was one of the team’s better performers last weekend and will be very much in the manager’s mind for a role in the game against seventh placed  Burnley who are 10 points ahead  of the Irons.