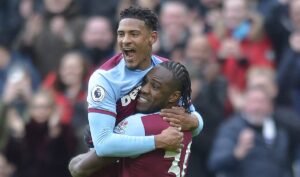 West Ham will be looking to come to an agreement’ aimed at settling whatever may be owed in Sebastian Haller’s transfer fee when he joined the club from Eintracht Frankfurt last summer.

The Hammers are believed to owe between £25-£30 million to following the Frenchman’s move from the Bundesliga.

But such is the financial crisis hitting most clubs that talks will be going ahead between globally aimed at coming to new agreements on the original terms.

Various stalling tactics could be used such as going to arbitration but the Irons are hopeful that all parties involved in such situations will come to their own agreements given the extraordinary health crisis which has thrown everything into utter turmoil.

A senior source told ClaretandHugh on the ‘phone: “That would be the best way forward. It’s a scenario which involves virtually every club ad they will all be trying to find amicable solutions to the issues. I think this will be the way forward between ourselves and Frankfurt.

The same situation can be applied to agents’ commissions.

← Moyes reveals his key job at this time
West Ham Podcast: Day 45 of no football →
Click Here for Comments >