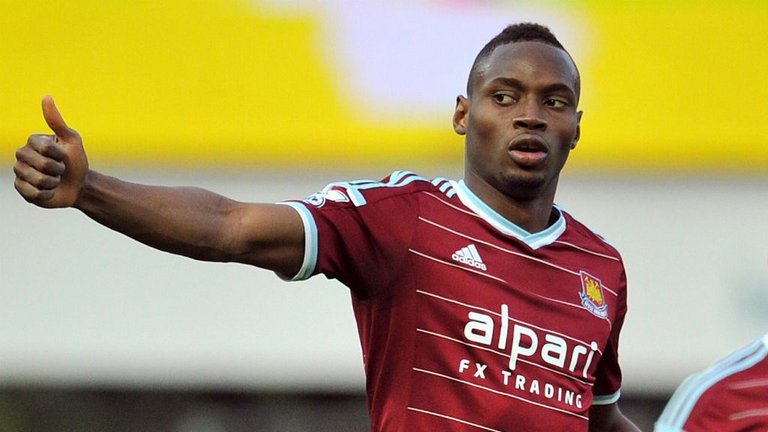 Diafra Sakho gave the Hammers a fabulous start before the team completely lost its way in a game to forget!

After the thrills and spills of Sunday’s clash against Arsenal, this was desperately dull fare to kick off  the New Year as the team extended its win-less run to three.

Sakho was withdrawn on the 72nd minute slowly trudging off  holding his back after goalmouth melee in the Baggies penalty area. Questions were immediately being asked as to whether he would make the African Nationsw Cup!

By the end of this dull affair we had seen both Matt Jarvis and Carlton Cole enter the fray – hopefully not a sign of things to come as we await news of the Sakho injury.

That is all for later, sufficient for now to say that this was a less than average performance from the team who had little idea how to break down a resolute Albion defence after Diafra’s early effort.

It had taken him just 10 minutes to find the net with a great header after fine work from Amalfitano – playing against his last season loan club – had sent Cresswell up to cross.

That should have settled the Irons down but instead they seemed content to sit back and slowly the visitors found a way into the game.

Downing, however, might have added to the lead when Song played a great ball out of defence  but the winger could only fire from a tight angle and Foster saved with difficulty.

After that the Hammers appeared to switch off completely and Adrian was forced to save low down from Baird before Brunt flashed a cross-shot wide.

Next Song conceded a free-kick five yards outside the box after hauling down Mulumbu but Brunt  fired narrowly wide.

Three minutes from the break though, Albion were level when Berahino slid home his shot past Adrian.

Adrian was forced to save from Berahino before Mulumbu shot into the side netting as the Baggies tried to answer the pleas of their new boss.

But Cresswell was the width of the woodwork away when slamming in a free kick with keeper Foster well beaten but sickeningly the ball rebounded off the post to safety.

Sam Allardyce decided to remove live wire Amalfitano for Matt Jarvis  but it was Downing who was responsible for our next effort which flew wide.

And Foster came out on top when Sakho attempted an overhead from ground before hobbling off holding his back just over midway through the second period.

Although failing to create real chances, the visitors had maintained more than a strong foothold in the game and the Hammers could find no answer to the two banks of four they had set up at the back.

And in the four minutes extra time, the Baggies broke out to threaten but Kouyate tracked back to thwart a threatening move.

Varela almost had the last word when curling a shot wide just ahead of the final whistle which saw the home side finish with one point from a possible last nine.