Posted by Sean Whetstone on January 16, 2015 in Whispers 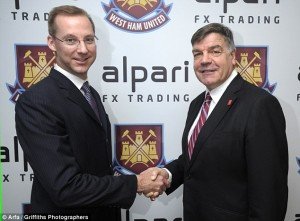 West Ham’s major shirt and West Stand sponsor Alpari (UK) Limited  confirmed today that it has entered into insolvency.  In a statement on their website Alpari UK admitted “The recent move on the Swiss franc caused by the Swiss National Bank’s unexpected policy reversal of capping the Swiss franc against the euro has resulted in exceptional volatility and extreme lack of liquidity. This has resulted in the majority of clients sustaining losses which has exceeded their account equity. Where a client cannot cover this loss, it is passed on to us”

West Ham’s sponsorship deal with Alpari is thought to be worth more than £3m per year. The announcement echoes the 2008 collapse of XL Holidays which left West Ham without a major sponsor.