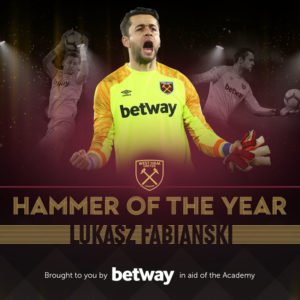 Manuel Pellegrini revealed at his pre-match presser yesterday that a decision would be made in the next 24 hours and it seems that has now happened.

The Polish international broke down during the Bournemouth game and is likely to be out for two months but it now looks certain that he will need surgery on his injury.

ClaretandHugh was told of the decision this evening with a senior source revealing on the ‘phone: “It now looks 80/20 that the operation will need to go ahead and we re waiting for the surgeon to give us dates.”

Meanwhile,  fears that Arthur Masuaku may have suffered a fresh injury were knocked back this evening when earlier reports that he had suffered a knock in training were denied.

We were told by the same source: “Such is the squad strength right now this is going to happen more and more – it was Arthur’s turn today.”

← How we rated the Irons against Palace
Pellegrini verdict: “Normally we will win” →
Click Here for Comments >