Hammers may take a hand in managerial sack race 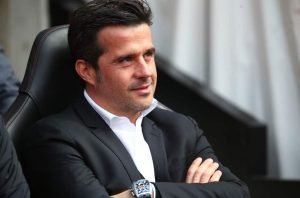 West Ham are in  position to seriously damage Everton boss Marco Silva’s managerial heath when the two teams clash at Goodison Park in the next Premier League fixture.

The Toffees find themselves in the highly unusual position of the bottom three which is almost unspeakable in their terms down the years, having only been relegated from the top flight once in their history.

But two wins, a draw and five defeats has left them in 18th place rubbing shoulders with Norwich and Watford for the bottom spot.

It puts Silva in a serious position at a club which is unused to anything other than top 10 status and according to The Telegraph the game against us could be crucial for his future on merseyside.

They report that his position is under the most serious scrutiny and that the Hammers now more than probably hold the key to his future.

The Telegraph reports: ‘Silva has himself labelled the fixture a “must-win” after collecting just seven points in the opening eight league games which have included defeats to newly-promoted Aston Villa and Sheffield United and last Saturday’s loss to Burnley.

Everton have only played one team from last season’s top six – losing at home to Manchester City albeit with an improved performance two weekends ago.’

With the Irons looking to bounce back from defeat at the weekend and Silva on the thinnest of ice an ultra fierce confrontation looks to be on the cards.