Hammers midfielder may go back to the future 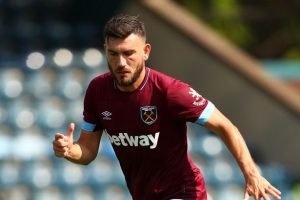 Robert Snodgrass, having become a bit part player at the London Stadium, could easily be on his way back to Leeds in the January window if the Elland Road fans have their way.

Snoddy called  time on his Scottish international career recently and it will be no surprise if he heads for the exit door in January or the summer.

With Leeds pushing for promotion he could be key to their chances of making it into the PL after narrowly missing out last season.

He has been sparingly used by Manuel Pellegrini starting just a single game, against Brighton, way back in August.

He has remained on the bench for the last three games and looks to be strongly in the mix if Pellegrini decides to shuffle his pack in the January transfer window.

And after moving from Leeds in 2012 return could easily be on.

He sent a personal video message to the Yorkshire club, who recently celebrated their 100th birthday and thanked them for giving him his first taste of English football after joining them from Livingston in 2008.

It was a message well received by the Leeds fans, many of them posting replies to the effect they would love to see him back at the club.

With Manager Marcelo Bielsa’s side once again bidding for a return to the Premier League, Snodgrass could be the experienced head necessary to see them over the line!