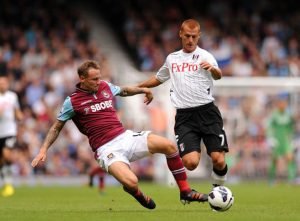 West Ham missed out on a £1m promotion bonus as Fulham beat Aston Villa in the Championship Final, the result means Villa are less likely to fork the £12m valuation the Hammers previously put on their player.

Villa lost 1-0 at Wembley today despite Hammer Robert Snodgrass playing for the full 90 minutes. Snodgrass is now expected to report for pre-season training at West Ham following the end of his season-long loan with the Midlands club who failed at the last hurdle.

Manuel Pellegrini will have a look at Scottish winger before making a final decision whether he will remain in the squad, be sold or be shipped out on loan again.

The win for Fulham also makes unlikely that previous Hammers targets Ryan Fredericks, Tom Cairney and Aleksandar Mitrovic will be available now. Each were scouted when David Moyes was in charge.

The good news is we see the return of a much loved London Derby including an awayday to Craven Cottage by the river.