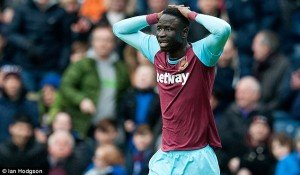 The departure of Cheik Kouyate (right) to Palace at £9.5 million has barely made a dent in the Hammers net spend for the season.

And with only very fringe players being allowed to move on if the right offers comes in  it means the club’s overall expenditure has hit an all time high this season.

Here’s how the money has been spent and what it means in terms of the club’s bank balance:

That’s around £5 million above or spot on below the predicted figure the board were set to invest and is of course on top of a managerial and backroom staff costs of about £12 million a year and excluding signing on, agent fees or potential add-ons.

The figure could go even higher should the club complete anticipated deals for a new midfielder and striker  which are claimed to be requirements of the new manager.