Hammers off to Wales for first Cup match 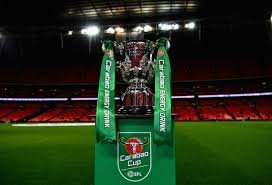 West Ham  will travel to Newport County away from home in the second round of the Carabao Cup.

The big clubs joined the party tonight and it means that we will be off on one of those possible banana skin trips which could prove embarrassing.

However, the reality is that we will be overwhelming favourites to overcome the League Two side who currently sit in 16th place with two points from their opening two games.

We can expect to see the Hammers line up with a mix of youth players perhaps involved as they set out on the business of finally bringing a trophy back to the London Stadium next year.

After the bitter disappointment of the journey to AFC Wimbledon last year following the defeat of Macclesfield the boys will be desperate to make amends.

It should be a straightforward job but as we have learned from bitter experience that rarely tuns out to be the case in the case of West Ham. Fingers crossed.

The Welsh club beat Gillingham on penalties in the first round of the competition, securing the victory over the Gills with a 4-1 shootout win after a 2-2 draw in 90 minutes.

Full fixture and ticket details will be confirmed in due course with the game planned for the last week of August.

5 comments on “Hammers off to Wales for first Cup match”