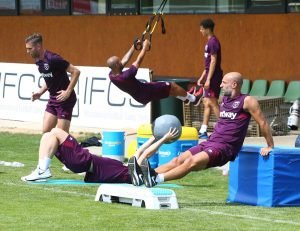 West Ham will operate a ‘one out, one in’ policy for the remainder of the Summer transfer window following the £16m signing of Javier Hernandez yesterday.

The Hammers have now reached their upper annual wage budget as well as having a full squad of twenty-five players. With the primary transfer business done the club will need to see outbound players before replacing them.

The most likely outbound candidates are Sofiane Feghouli, Robert Snodgrass and Adrian, all three of which travelled to Germany and remain part of the first team squad in pre-season training.

Feghouli travelled separately by car to Germany after an alleged meeting between him, his agents and Galatasaray in Paris over the weekend. He is the most likely to leave first for a fee of £4.5m which would allow the Hammers to buy Badou N’Diaye for a reported £8.5m.

Brighton has made an initial enquiry for Robert Snodgrass but that has not been followed up by any bids. The midfielder has also been linked with other clubs including Leeds. A source at Leeds said there was no truth in the rumour adding he was out of their league budget wise.

Adrian could be Palace bound if remains unhappy at West Ham with Newcastle also linked with the shot stopper. The keeper needs to decide whether he is happy to sit on the bench as Joe Hart’s number two or whether he wants guaranteed first team football this coming season.