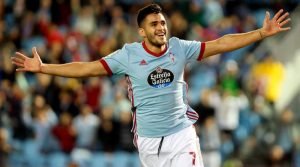 West Ham are this morning again being reported as ready to make big summer moves for Maxi Gomez with Aleksander Mitrovic also on their agenda.

There have been regular reports linking the Celta Vigo hitman with both Barceloa and Spurs but the Hammers have pursued the 22 year old since last summer and boss Manuel Pellegrini has made him the number one target.

The club are keen on Fulham’s Mitrovic believing there may be a relegation clause involved in the former Newcastle striker’s  contract with the relegated Londoners. 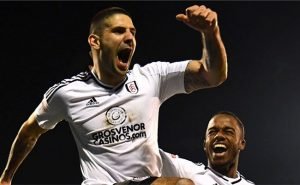 And whilst Gomez has a £43.5 million release clause in his deal the Irons will negotiate hard in a bid to get that down a bit.

However, the player is strongly fancied by Pellegrini and acording to the London Evening Standard  Mario Husillos has been keeping tabs on Gomez throughout the season.

The Hammers also have a record of looking at relegated clubs at this time of the year – as was the case with Lukasz Fabianski last summer -and Mitrovic is very much in their minds.

The Standard report that the 24-year-old Serb looks certain to leave Craven Cottage and that he is keen to stay in England.

They add that Crystal Palace are also interested in the front man who scored 11 times for Fulham this season.