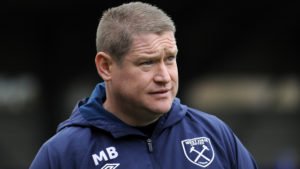 Head coach Matt Beard fully expects  Chelsea to offer his team a tough test this Sunday but is convenced we can beat the Blues.

The Irons return to Continental League Cup action with a first group game of the campaign this weekend, away to a Chelsea team that have picked up four points from their opening two Barclays FA Women’s Super League matches.

West Ham sit in Group D, alongside the Blues, as well as Tottenham Hotspur, Reading, Lewes and Crystal Palace, and Beard is expecting a real challenge in progressing to the quarter-finals of the competition.

But he declared: “It’s a tough group and we want to progress through it, like we did last year

“Chelsea have had a tough start themselves. They had a lot of chances against Brighton but were lucky to get something out of the game. We’re expecting a reaction from them, but we need to do our job.

“We played them pre-season and they were excellent against us. It was a real learning curve for our team. I’ve watched both of their games. They’re very good on the ball and they are a world class side, so it’s going to be a tough afternoon for us.

“That being said, we feel we’ve built a team that can beat these sides and that’s exactly what we are looking for on Sunday.”

Beard has a near  fully fit squad to choose from, with Esmee de Graaf and Leanne Kiernan nearing their respective returns for West Ham.

The head coach has confirmed he will make changes to his side for Sunday’s cup match as he looks to give other players the opportunity to force their way into the starting XI on a regular basis.