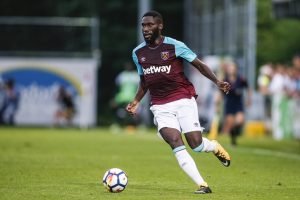 Seems ridiculous but Arthur Masuaka still has a couple of years left on his contract!

However, the  two year option applies to both himself and the club rather than – as is usually the case – West Ham alone.

The Hammers rate the player at around the £5 million they paid for him when taking him from Olympiacos.

He was of course awarded a new four year deal under Pellegrini which runs out in 2024 although the Hammers will be hoping for an offer of a permanent or at very least loan move this summer.

He is believed to be on a wage of around £50k a week and the Hammers are keen to make space within the wage bill for new arrivals.

Masuaku has of course has his injury problems notably with a knee issue but has made just 25 appearances for the club in the last two years and an offer of almost any amount would probably see him gone.