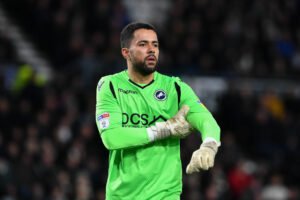 The club would have to find a Brit as they only have one home grown spot left in the squad and the only stopper available – apart from 42 year old Roy Carroll – is former Millwall keeper Jordan Archer.

The 26 year old however hasn’t kicked a ball for the past six months after being released by Millwall at the same time as David Martin who, despite being seen as very much a Hammers training ground keeper, has to be in line for the game at Chelsea.

However, when asked by reporters whether Martin was fit at last week’s pre Spurs press conference Pellegrini’s instant reaction was “Who?” before explaining, when reminded by the media, that he was fully fit.

Archer was always an unlikely candidate  after a career which before Millwall included spells at Harrow Borough, Bishop’s Stortford, Wycombe Wanderers and Northampton Town on loan whilst at Spurs before making 144 appearances for Millwall.

We were told by a Hammers source on e mail : “Yes, we looked at possible free agents but the player hasn’t kicked a ball for six months.”