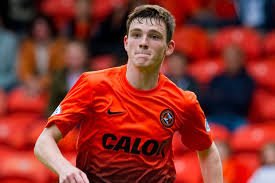 West Ham’s pursuit of a second left back may take them back to Dundee United’s Andy Robertson despite it looking as though their chances have gone to Hull.

Sources inside the Boleyn have been suggesting that we could return for the player despite City boss Steve Bruce being apparently ready to break the £2 million barrier for the player.

The Hammers have already had a £1.5 million bid turned down but remain keen on the player and a second left sided defender remains high on their priority list.

Having signed Aaron Cresswell from Ipswich they are keen to ensure they have adequate cover in the position and haven’t entirely ruled out a second move.

An Upton Park source told ClaretandHugh: “We are told he’s going to Hull but the club are very busy trying to bring players in – they are certainly not done in the transfer market.

“The club want to increase competition across the board and so far are very happy with the signings they  have made.

← Cottee: Classy Cresswell will get even better
Ray Stewart: “Robertson has something” →
Click Here for Comments >

3 comments on “Hammers Robertson hopes may go to Hull”