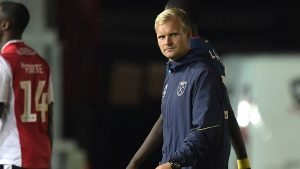 However, the visitors were shocked as the Irons grabbed the points via goals from Manny Longelo and Jahmal Hector-Ingram.

Porto managed a second half equaliser, but Liam Manning’s lads kept up the pressure with a determined display to clinch victory through Hector-Ingram.

“Their commitment was great tonight. We spoke after our defeat to Leicester about what maximum commitment looks like and they put that into practice tonight. We gave them a game plan and at the end, the lads were flat out. The way they applied themselves was brilliant.

“The young lads did really well. Dan Chesters did well and Manny Longelo obviously got his goal. Keenan Appiah-Forson came on and had a positive impact and then I thought the two centre-backs as well were outstanding. Alfie Lewis did well too; they really led by example and overall we’re delighted.”

He added: “We prepared well on the opposition in terms of how they play and they’re quite a lot older than us as well. Credit goes to Steve [Potts] and Yacine [Allag, U23 Performance Analyst].