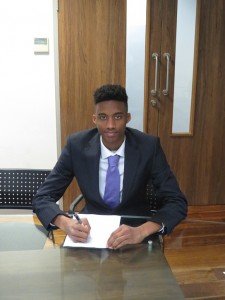 West Ham United have announced the signing of a young goalkeeper called Nathan Trott on a two-and-a-half year deal. The Bermudan-born shot stopper has put pen to paper on a long term deal which, subject to FIFA approval and International clearance, will keep him at the Club until June 2018.

Trott is widely regarded as one of the best young goalkeepers around, having impressed during his trial at the Club. Speaking to WHUFC.com Trott said: “I’m very happy; there’s been a lot of hard work put into this, not just by myself but also my Dad, my agent and all my family.”

“I was very surprised when they told me; it’s a huge moment for me. I like it a lot here, I love the club. Everyone round here is very friendly.”

Trott continued: “I’ve had a few training sessions with the first team which was really exciting, you have to work hard! It was a great experience, it was scary at first, I was pretty nervous but I got used to it and will hopefully do it again soon. I look up to David De Gea, Petr Cech and Thibaut Courtois”