Hammers speak out on Crouch 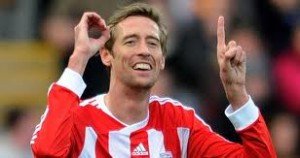 The huge former England man has been named this morning as a Hammers target and ClaretandHugh can confirm the Stoke and former England striker is on the club’s hit list.

The Potteries outfit will want £2 million for the striker and we have been told that the player is on personal terms of £60k a week.

That would make the cost of  his arrival at the Hammers around £80k a week and take him up to the age of 35.

A source told us: “It’s a decent chunk for a player of his age – is he worth that? -Maybe. We are looking at it.”

← Surely it can’t be Carlton against Malaga
Clarke: Zarate has little chance in this set-up →
Click Here for Comments >

3 comments on “Hammers speak out on Crouch”