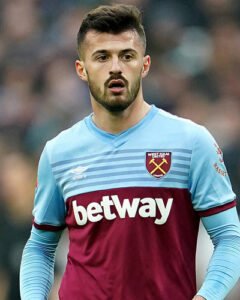 It is claimed that Celtic boss Neil Lennon is keen on the Switzerland international and the Scottish Premiership champions have made inquiries about his availability – taking the player either on loan or on a permanent deal. However the report further claims, the Hoops face competition from a number of Premier League clubs, with Ajeti struggling to break into the West Ham side this season following his £7.83m move from Basel last summer.

Celtic were keen to bring the striker to Parkhead last summer as well, but were priced out of any potential move by the Hammers.

The 23-year-old has made just nine Premier League appearances for West Ham this season, all from the bench, and has grown increasingly frustrated by the lack of first-team opportunities. Ajeti could be one of a number of luxury and fringe players allowed to leave

West Ham would be lucky to recoup half the value they Manuel Pellegrini and Mario Husillos shelled out for Ajeti last summer. Although he has yet to get a start in the Premier League his substitute appearances have been poor and he has failed to make the step up to the Premier League.

A step down to Scottish Premiership might help his game and his confidence, whatever happens, it is doubtful he is in David Moyes plans for next season.

It might be time to cut our losses on 23 -year-old striker and accept it didn’t work out. Ajeti topped a Claret and Hugh poll of nearly 10,500 votes with 1,529 readers (14.68%) suggesting he was surplus to requirements and should be moved on.

← David Moyes will have zero transfer budget
Moyes on Rice: “We’ve no intention of letting him go” →
Click Here for Comments >