Posted by Dave Langton on October 14, 2021 in News, Whispers

Hammers striker target Paul Onuachu has switched agents as he looks to seal a move away from Genk.

Foot Mercato reports that the towering forward has decided to switch his representation after a summer in which he failed to earn a move from the club. 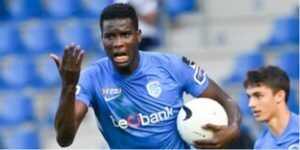 That was despite links with both the Hammers and Arsenal, and he has now gone from being represented by Patrick Mork to working with the Niagara Sports Company.

They manage Alvaro Morata, Dani Olmo, and Jonathan Ikone, who have all had superb careers to date.

Of course, Onuachu is set to come up against the Hammers soon, with Genk playing West Ham in the Europa League group stages.

He could count that as something of an audition, although his form for the Belgian club has been nothing short of sensational.

Onuachu has already scored nine goals in nine games for the club in the league this season and has a record of 56 goals in 83 games for Genk in total.