Hammers sweat it out on AC’s D-Day 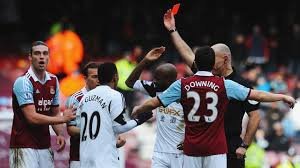 West Ham United are today anxiously awaiting the outcome of the appeal into Andy Carroll’s red card against Swansea City at the weekend.

The striker was dismissed by referee Howard Webb after the official judged that he had intentionally thrown an arm in the direction of Swansea central defender Chco Flores.

Many believe that the Swansea back four man’s over-reaction by falling to the ground – when TV replays showed he hadn’t been touched – contributed largely to the sending off.

And even Swans boss Michael Laudrup declared that it should not have been a sending off and that a club fine against Flores is possible.

West Ham must have all their evidence before the three-man panel by 1 pm with the decision expected later on this afternoon.

Should the panel uphold the Webb decision then the striker will face a three match ban although there have been reports the Hammers may go to law should their appeal fail.

A source told ClaretandHugh  exclusively: “That is a consideration we shall look at after the appeal should it fail.

“There’s obviously a real sense of grievance inside the club and we are hoping for the right result.”