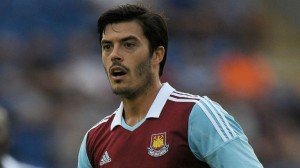 West Ham have received no bids or inquiries for central defender James Tomkins.

Reports arose yesterday in The Times and Telegraph – before being repeated on Hammers independent websites – that Newcastle were back on the trail of the home grown defender.

But ClaretandHugh was told this morning the club has received no inquiry adding: “Given how close we are to the January window I think we might have done if there were any truth in it.

“It’s an odd one because with Newcastle’s managerial situation so uncertain it’s difficult to see how that could be the case.”

And he added: “Even were a bid to come in it would be rejected because we have no intention whatsoever of selling such as him in January but in fact there has NEVER been a bid for him anyway.”

The 25-year-old centre half, who made his 200th appearance for the Irons against Arsenal on Sunday.