Six foot four giant midfielder Raoul Loé has been linked to the Hammers again following a hint by David Sullivan in an official interview on WHUFC.com. 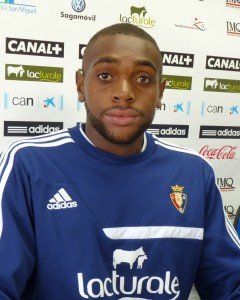 In 2009 he signed a contract with AD Ceuta in the third division, after impressing in a trial and appeared in both round-of-32 legs against FC Barcelona in the following season’s Copa del Rey.

In the 2011 off-season Loé moved to CA Osasuna and in 2012 made his official debut for the Navarrese, against Barcelona in the domestic cup.

In 2013 Loé was called up by Cameroon for the first time, for a friendly with Ukraine. He made his debut starting in a 0–0 draw at Olimpiyskiy.

Earlier this this year Osasuna accused West Ham of being two-faced for pulling out of a deal for Raoul Loe after the Spanish league side thought everything had been agreed.

The midfielder flew to London only for the Hammers to cancel the agreement via e-mail on the morning of the medical, explaining they had agreed to loan Antonio Nocerino from AC Milan.

Osasuna’s sporting director Petar Vasiljevic said: “Everything that has happened has surprised me. It was all done and we left it with them. I cannot understand how a club at that level can negotiate and work in a two-faced way like that.

We thought the subject was concluded and felt the talks had been completed. The club received a firm offer from West Ham and we reached an agreement. It was then left in the player’s hands to go ahead and pass the medical. He travelled to London with his agent where they waited and went to a hotel.

“The following day when they had to undergo the tests they pulled out of the deal, blaming it on the fact that they signed someone else.”