Long-time Hammers target Nikola Milenkovic has been linked with a potential move to Atletico Madrid.

The Hammers were reported to be interested in a deal to sign the central defender in the summer transfer window but no deal ended up being struck and he remained with Fiorentina in Serie A. 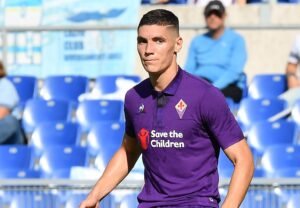 However, a new report now claims that the Spanish club are in the race to sign him and could challenge any potential new bid from the Irons, if they decide to once again try to lure him away from the Viola.

TMW claims that Atletico are running the rule over Milenkovic ahead of a possible summer bid as Diego Simeone looks to bolster his backline.

The Irons get a mention as they made a bid in the summer, and TMW believe he was very close to ending up in east London.

It remains to be seen if Moyes’ men will again be on the hunt for him in the summer.