Hammers tell Schalke what they want for Perez 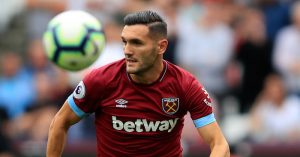 West Ham have rejected an attempt by Schalke to take Lucas Perez to the Bundesliga on loan.

The BBC have reported that the £4 million summer signing is very much on Schalke’s wanted list as a loan signing until the end of the season.

But when we contacted the Hammers this afternoon it quickly became clear that as was – and is  the case with Javier Hernandez and Valencia – the club has no interest in loaning the former Gunner.

Valencia have since offered £7 million for the Mexican e but the Irons want around £12 million if Little Pea is to leave the London Stadium.

Their position is clearly exactly the same as far as a loan is concerned on Perez with there being no chance of such a deal taking place unless around £4 million is offered.

We were told by a highly placed source on the phone: “We have said many times there will be nobody leaving the club on loan this winter and that hasn’t changed because deadline day is approaching.

Lucas Perez will stay here unless the right bid is made.”

4 comments on “Hammers tell Schalke what they want for Perez”