Hammers to travel to Kent in the cup

Posted by Sean Whetstone on December 3, 2019 in News, Whispers 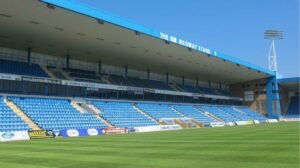 West Ham have been drawn against Gillingham away in the FA Cup third round proper to be played the first week of January.

The Hammers have played the Kent side ten times since 1912 with six wins, one draw and three losses.

The first game between the pair played in November 1912 resulted in 4-0 win in the Southern League First division.

West Ham’s last game against Gillingham came over 14 years ago in February 2005 with a 1-0 win thanks to a goal by Marlon Harewood.

The cup draw will be played at Priestfield Stadium which has a capacity of 11,582, the FA rules dictate an away allocation of 15% which should work out at 1,737, however like always this is subject to segregation in the stadium and local police advice.