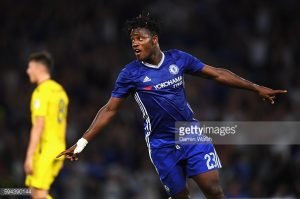 The Irons are set to make a firm offer to buy Michy Batshuyai with Chelsea disinterested in letting the player out on loan.

The Belgian striker has failed to make a single Premier League start for the Blues this season despite 17 substitute appearances for the West London team but he has remained bang at the top of the Hammers wanted list despite scoring just one goal.

And Slaven Bilic – knowing that this year’s transfer funds will be bolstered by £25 million still in the bank from last season’s failed efforts to get a top target – is pushing for ‘Bats.’

The Hammers would be ready to take him on a year’s loan but the Blues are keen to sell if they can get back the £33 million they paid for him. They are planning big-money striker signings this summer ahead of a return to the Champions League, so would prefer to move him on permanently.

The Hammers thought they had him in the bag last June but Chelsea’s last minute swoop snatched him from under their noses.

Since then we have seen our injury woes worsen and the club will be open to offers for Andy Carroll and Diafra Sakho.

← Another injury blow for West Ham
Report: Hammers close in on right back →
Click Here for Comments >