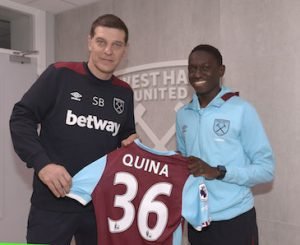 Young West Ham midfielder, Domingos Quina could join Bolton on loan for the remainder of the season Sky Sports have claimed this morning. The Portuguese U20 international has made four first-team appearances for West Ham this season.

David Moyes says he has yet to make decisions on Reece Burke and Josh Cullen returning to Bolton.

Moyes was asked by reporters yesterday  about Reece Burke and Josh Cullen to which he replied:

“Decisions will be made on them probably after tomorrow, we need to take to take it the wire. We’d liked to have done it sooner but as your question suggested, we have got a few injuries so we need them around just now.”

If West Ham do not land any of their transfer targets in the next 48 hours Cullen and/or Burke could be required to remain in the squad for cover.