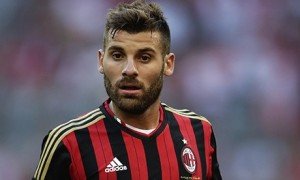 West Ham’s chiefs have told the fans not to hold their breath on January signings!

Unless the board is 100 per cent convinced a new signing will “definitely improve the squad.” they will be keeping the coffers firmly shut.

Last year’s moves for striker Marco Borriello,midfielder Antonio Nocerino (pictured above) and Colombia left back Paolo Armero – brought in on top wages – were all released after deeply disappointing spells.

Thirty four year old Dirk Kuyt is the latest veteran to be linked with the club after a week in which Darren Fletcher was been at the centre of the club’s thoughts.

But this morning an insider told ClaretandHugh:”There’s been a lot of  talking going on all week but nothing has been concluded. It’s a time to look around of course but in the main January buys are never good buys.

“We are in a good position to only buy players who we really believe will improve the team, either short or long term.

“If you look at the money spent over previous January windows, the cost has run to tens of millions with fees, agents fees and wages and very few of the players had any impact. Our position is very healthy.”