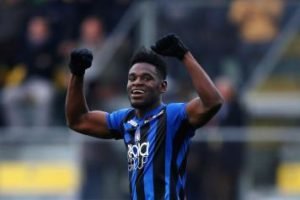 West Ham are claiming they have no long term interest in Atalanta striker Duvan Zapata.

Despite reports in Europe claiming the Irons want the £30  million plus striker after launching  bids in the winter window the club claim there is nothing going on.

The reports say that ‘a dry bid’ for a loan was attempted followed by a £30 million plus on deadline day and that the club are back in talks for the 30 year old for a summer move.

It seemed highly unlikely to be the case with the striker priced at such a figure as he enters his thirties and so it has turned out with the Hammers revealing to Claret and Hugh that they have no intention of making a move or that they have held further talks.

The club did indeed make a late move on deadline day but that failed as with a key figure needing to sign the deal he went missing.

And this morning a source updating us on the situation made the position clear telling us: “”Yes, we did make that move but that’s the only truth in the current report. There are no talks going on at all.