No surprises from Mark Lawrenson this weekend with the BBC pundit believing that the Hammers are in for another 2-1 defeat following the beating from Frankfurt by the same score line.

He makes the point = not that it’s necessarily rocket science – that the Gooners will be the fresher of the two teams and that the Hammers are coming under the cosh as a result.

Amusingly, he adds as if this is some truly perceptive insight,  that as HE has been saying all season we don’t have the biggest squad. Well well! 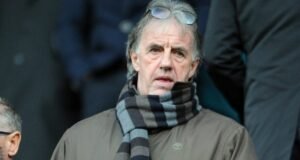 Err, I reckon that’s been noticed by the vast majority of football people and that this is out problem against Arsenal.

The reality may be that we are always up for it against the top sides and with the League position now of utmost importance Moysie will have the boys truly wound up for this one hopegully.

Writing on the BBc website Lawrenson declares: “As I’ve been saying all season, West Ham don’t have the biggest squad and they will almost certainly make some changes here.

“That should help Arsenal, although the Hammers will still be difficult to beat.

“The Gunners have benefited all season from not being in European competition – most of their midweeks have been free – but being fresher is particularly handy at this stage of the campaign.”