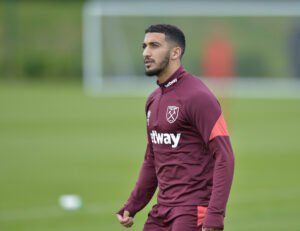 Algeria announced their squad for the upcoming Africa Cup of Nations on Friday afternoon and the Hammers have been hit by Said Benrahma’s selection.

There had been doubts as to whether the competition would go ahead given the covid situation but as things stand it will will start on January 9.  That could of course change.

Benrahma’s involvement will mean he misses  several important matches for their respective clubs.

The competition is slated to take place in Cameroon but a report from the I paper has claimed that there could be a postponement, with FIFA president seemingly backing that course of action.

Were that to happen, it would mean that Benrahma would be available to Moyes throughout the month, when the Hammers are scheduled to play Crystal Palace, Leeds, and Manchester United in the league, and Leeds in the FA Cup third round.

It would be a big boost for Moyes but no decision has yet been taken.

← All eyes on United re Rice
Dawson explains his Christmas Day! →
Click Here for Comments >

One comment on “Benny selected but Afcon doubt remains”