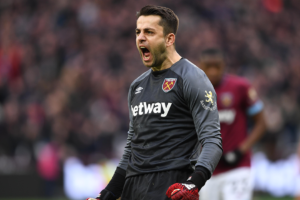 West Ham are keeping an eye on  – but won’t be holding talks – on players whose contracts are heading into their last year or two until well after the current health scare has peaked and has flattened.

Indeed, they may even be leaving such talks until the January window but there should be no alarms as we assured the majority of the players all have one or two year options on their deals.

Lukasz Fabianski’s contract runs out in June ’21 but CandH has learned he has a further year’s option which would take him to the age of 36.

At that stage the Hammers would hope that on loan youngster Nathan Trott  or Joseph Anang maybe ready to step up.

Fabian Balbuena’s contract expires in 2021 along with Michail Antonio although once again options are understood to be in place should the club choose to trigger them.

← West Ham matches could be played outside London
Westley: How Japan will play in front of crowds again →
Click Here for Comments >