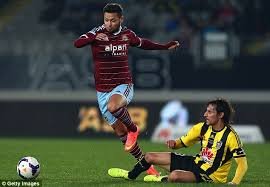 Harry Redknapp has been told to make up his mind over Mauro Zarate or risk losing out on taking the player to Queens Park Rangers on loan for the rest of the season.

Redknapp told ClaretandHugh this morning that although the Argentinian striker had passed a medical with the club, he still hadn’t made up his mind on the deal.

However the Irons are in no mood to wait long for an answer on the player and are not interested in playing games over the terms of the deal given the amount of interest in Zarate.

The player himself wants to stay in London but the Hammers will refuse to get involved in any wheeling or dealing on how much Rangers pay on wages which could be the cause of the delay.

A Hammers told us: “We are not going to get into ducking and diving over this. The terms of the deal are known to Rangers and that’s that.

“Its up to them but we’ll keep him if they try to change the  deal. We have interest from three other Premier League clubs, plus 12 clubs abroad.”

These are thought to include Newcastle and Sunderland along with two or three Italian outfits so there’s next to no  chance of the Hammers having an unhappy player on their hands.