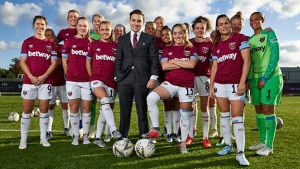 West Ham’s Women team will host Spurs Women in the first ever game at the London Stadium on September 29.

It’s a massive step up for the  game with the Hammers normally playing their Womens’ Super League games in front of 2,000 at Rush Green.

The Hammers have obviously been influenced into the move by the successful Womens’ World Cup which has led both Manchester City and Chelsea to switch games to bigger stadiums.

The BBC reports managing director Jack Sullivan as saying it is “another historic day” for the side.

The biggest crowd West Ham Women have played in front of was 43,264 at Wembley in their Women’s FA Cup final defeat by Manchester City in May.

“After the success of last season and walking out at Wembley, it will be a great opportunity to play on an iconic stage – our own home ground – for the first time ever, engaging with the West Ham fans who we urge to come and get behind the team,” said Sullivan.

“It promises to be a magnificent showcase for West Ham United and women’s football as a whole.”