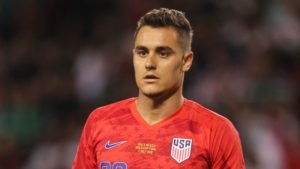 Reports suggesting that Aaron Long could again become a target for the Irons this winter are unlikely to be fulfilled.

The Hammers chased the New York Red Bull defender  in the summer before it became clear the player was not going to get a work permit.

That’s now changed with the player getting regular appearances in the USA side and were the Hammers to remain interested they could succeed in cutting through the red tape.

However, although there have been regular reports claiming the Hammers are keen to sign a new central defender ClaretandHugh has been told the opposite is actually the case.

And that suggests that Long – reportedly desperate for a move to the Premier League – won’t be finding himself en route to the London Stadium.

A senior source told us by e mail: “That’s not a position weare looking at given we have Issa Diop, Angelo Ogbonna, Fabian Balbuena and Winston Reid on his way back.

“We also have Goncalo Cardoso performing extremely well at under 23 level and seriously trying to push himelf into first team contention.