Posted by Sean Whetstone on January 9, 2016 in News, Whispers 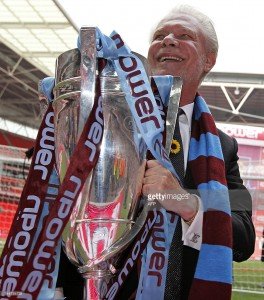 A football journalist named Michael Cox has written an  ESPN  blog in Australia explaining how the Premier League would look were a knockout competition?

He asks: ‘What if the Premier League was played like the World Cup?

To demonstrate the random effect of tournament football, he mocks up a knockout tournament featuring this season’s current top 16 Premier League sides, replicating the classic structure of World Cup tournament of four groups of four, followed by a knockout stage.

He puts West Ham in Group B  together with Spurs, West Brom and Southampton

So there you go, West Ham are crowned Championships of the Premier League if it was played as a knock out tournament. What makes this article even more remarkable is the journalist is not a bias West Ham fan. He supports non league Kingstonian FC.

One comment on “Whacky PL blog puts Hammers on top”