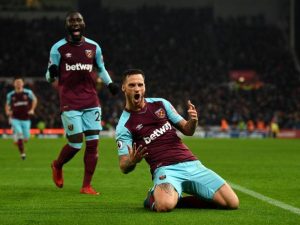 Thrilled Marko Arnautovic again rubber stamped his credentials as Hammer of the Year with a remarkable two goal performance against Southampton.

And afterards – speaking to the official site – he explained how the victory was achieved and how pleased he was that the team showed its quality.

He said: “That was 100 per cent the best response to what happened in the last game. I think we had a couple of difficult weeks behind us and obviously we wanted to get good results and we didn’t.

But but we said during the last three weeks that we have to stick together as a team, the whole club, and we can come out of this because we know we have a lot of quality and I think we showed that today.

We played brilliantly from the back and through the midfield and up front. I thought it was a fantastic performance.

“It was good. When we came out before the game, we felt the crowd was behind us and that was an amazing feeling. Then, when you start a game like that, they come behind you and that is very good. We kept going forward and trying to score some goals.”

“I’m happy with my goals. I always want to help the team and score my goals, but the most important thing is the team and as a team we worked fantastically hard and I’m very happy with these three points.”

“We always believe we will survive. Everybody has to believe, not only us who have to play. There are seven or eight teams fighting against relegation, but we need to enjoy these three points and then, from Monday, we will focus on Chelsea.”