Happy away day for the Irons 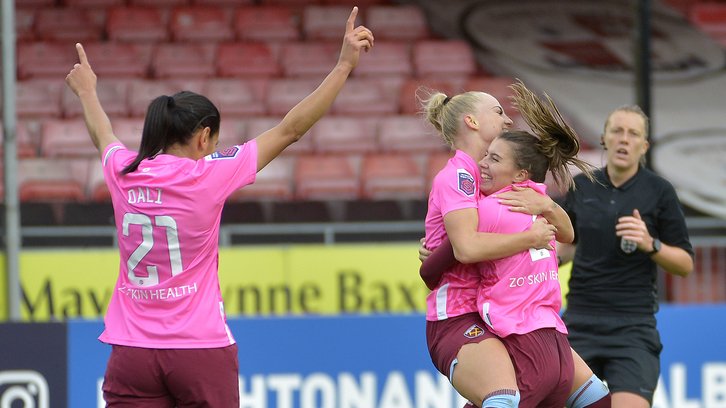 Martha Thomas’ grabbed the first from eight yards,  Kenza Dali’, the second from the spot and Alisha Lehmann’s fine finish in a three-minute spell saw the points head back to Rush Green,

Brighton’s best chance of the first period fell to Aileen Whelan, who hit the cross-bar in the first period with a lobbed effort before Megan Connolly grabbed a consolation late on in the Barclays FA Women’s Super League fixture.

Leanne Kiernan made her forst start for the Irons and he Republic of Ireland international’s directness was a huge positive in the opening exchanges.

It was the latter who carved out the first half-chance, winning the ball back in midfield before laying off for Cho So-hyun. The Korean played out wide to Redisch Kvamme, but the cross in was held by Megan Walsh.

Brighton & Hove Albion went close on the counter-attack through Aileen Whelan. The forward got past the defence and lobbed an effort towards goal, which bounced back off the woodwork. Ellie Brazil then turned her follow-up effort over the bar.

The official website report says: ‘West Ham’s front three was clicking and the links formed by the trio paid off on 24 minutes. Alisha Lehmann’s mazy run into the centre created space for Thomas to the left of the goal. Lehmann played in her attacking partner, who subsequently smashed home her second of the season from eight yards.

Lehmann was again involved as the Hammers went in search of another. This time, West Ham’s No7 went wide, dinking a cross back across the six-yard box. A shade lower, and Kiernan would have met the ball for what would have surely been West Ham’s second.

The Hammers went close to another just four minutes following the restart, when a quick free-kick found Kiernan out on the wing. The attacker showed no fear, turning inside and unleashing a powerful strike, which just rose over the far corner.

Moments later and Thomas had another chance at her second, lashing a left-footed effort just wide of the near post, before Lehmann’s powerful effort from the right was somehow kept out by the outstretched Walsh.

West Ham’s second finally came with 20 minutes left after Thomas was brought down in the penalty area. Dali confidently stepped up and coolly passed the ball into the far right corner, sending goalkeeper Walsh the wrong way.

Three minutes later and the three points were secured thanks to a third Irons strike, this time from Lehmann. Once again, the Swiss forward was given too much time on the ball, running into space on the right, before leathering home a powerful effort for her first of the campaign.

Brighton & Hove Albion substitute Megan Connolly will feel she should have done better when a crossed ball fell into her path, only for the forward to put over from four yards out.

Connolly would scramble home a late consolation for the home side but it was nothing more than exactly that, as West Ham left the Peoples’ Pension Stadium with three goals to their name and three points for their efforts.’