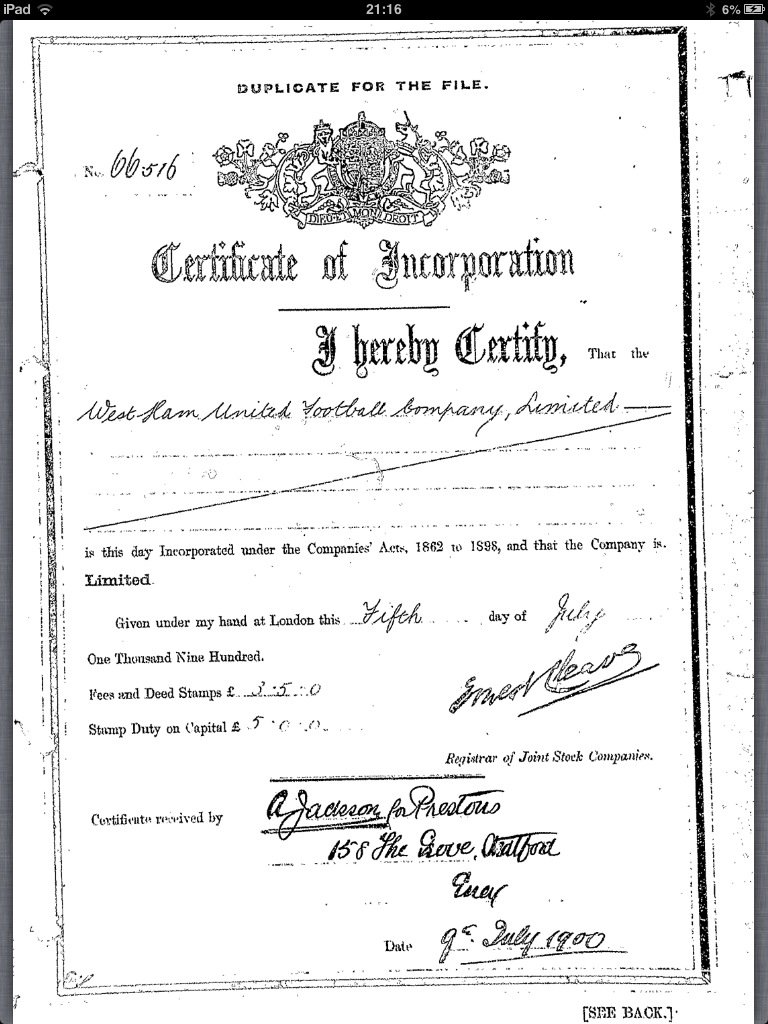 As a kid I learned from the match day programme that the formation of West Ham was always given as 1900 yet this was changed to 1895, in time for the club to celebrate its centenary in 1995.

1895 of course saw the formation of the Thames Ironworks Football Club but with professionalism creeping in to his works team, Arnold Hills – who believed utterly in amateurism and a team made up of his employees – wound up the club in the June of 1900.

114 years ago  at 55 Barking Rd, Canning Town, the offices of the Thames Ironworks sports and social club, seven local businessmen signed the document that formed West Ham United Football Club. The document was filed the next day and the new club was born.

Those seven backed by another three were the club’s first directors, each buying 10 shares and Arnold Hills the owner of  Thames Ironworks agreed to put up half the money needed to start this new club and allow them free use for a period of The Memorial Fields Ground.

Ten of the team in that team lived around Canning Town or Plaistow, one lived in Forest Gate and one in Ilford.

Some were clerks at the Ironworks, a couple were associated trades, one was even a pig farmer whose farm was roughly where the BP petrol station is on the A13.

Without those 10 men coming together and launching the new club I may not be writing this as there would almost certainly have been no West Ham United.

But they did and while success eluded them for many a year they laid the foundation stone of what was to become one of the biggest clubs in the country.

Without the Thames Ironworks football team there would be possibly no West Ham and West Ham United was formed out of the ashes of the defunct club.

The document the founders signed undertook to conduct and carry on the business of TIWFC but this was still a new club with a different set up and with new directors.

As I’m away on holiday from Friday evening I’m taking this opportunity to wish the club I love with all my heart a very happy birthday on Saturday!

By the way,  the building where the document was signed is now  the Station Cafe next to the dentists opposite the post office just before the Canning Town roundabout.

← Kolo: The talking goes on
Hammers proceeding on “other targets” →
Click Here for Comments >