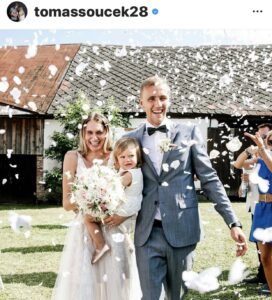 It has been a big year for new permanent signing Tomas Soucek who completed a £19m move to West Ham from Slavia Prague this year.

The West Ham United midfielder was also named 2019 Czech Footballer of the Year in March this year.

Soucek moved to the UK with his long term girlfriend Natalia and his daughter Terezka last January,

Last Saturday Soucek used his time off before the new season starts to get hitched and marry Natalia.

The Hammers posted photos of his happy day on social media but a honeymoon will need to wait as he reports to Rush Green on Sunday to undergo testing before pre-season training begins again on Monday.