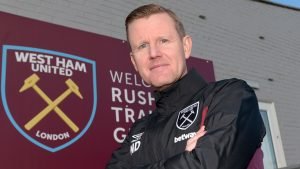 He had previously been Head of Sports Science at Charlton and Birmingham and also served the Hammers during a previous spell from June 2007 to June 2009.

As things stand, Gary Lewin is continuing as Head of Medical Services, although his contract is also soon up for renewal, along with Head Physio Dominic Rogan, physio Fraser Young, rehab fitness coach Eamon Swift and Head of Performance Analysis Jamie Osman

Davies writing on LinkedIn this week said: <em>“Proud to have been part of the staff at West Ham for the last six months. It’s been fantastic to work with some outstanding people.

“I wish the club well in the Premier League next season. Excited for what the future may hold. Next chapter…”</em>

One comment on “Head of fitness leaves West Ham”