A 10-man Hammers were beaten 1-0 by Eintracht Frankfurt on Thursday night as they crashed out of the Europa League at the semi-final stage.

The Irons struggled immensely throughout the 90 minutes, with David Moyes’ side looking absolutely exhausted at times. 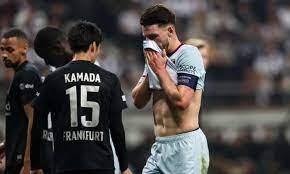 The task was made all the harder when Aaron Cresswell was sent off after just 16 minutes.

The left-back was caught under a high ball and dragged down Frankfurt attacker Jens Petter Hauge. The referee initially showed a yellow card but VAR intervened and the card was upgraded to a red.

Later on, Moyes himself was red carded.

Moyes responded by sending Ben Johnson on for Manuel Lanzini to cover for the defensive loss, but the Hammers were a goal down after 25 minutes.

Rafael Santos Borre somehow got completely free in the box and he finished powerfully after Ansgar Knauff’s cross.

The Irons did have a fantastic chance to equalise on the night just before half-time, as a Jarrod Bowen free-kick found Kurt Zouma at the back post, but the ball just seemed to hit him, and was cleared off the line.

The only real chance that came the Hammers’ way in the second half fell to Tomas Soucek just a minute from time, reaching a corner and agonisingly heading it wide.

The main talking point of the second half came when Moyes himself was sent off, having kicked the ball at a ball boy in anger after it was slowly returned.

A heartbreaking night for the half-baked Hammers.

10 comments on “Heartbreak for half-baked Hammers”