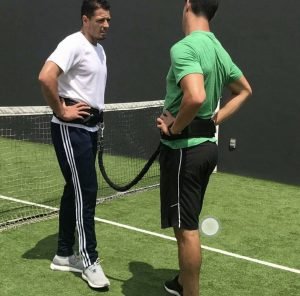 The reliable Jason Burt in the Telegraph confirms West Ham have agreed a fee of £20million plus up to £4million in add-ons with Stoke City for Marko Arnautovic. Earlier this evening local paper The Stoke Sentinel claimed that Marko said goodbye to his teammates at the training ground.

The Telegraph’s chief football correspondent with good contacts on the West Ham board has also said the Hammers are also close to signing Javier Hernandez from Bayer Leverkusen with the Mexican striker understood to have already settled on personal terms with the Irons. A fee of up to £13million has been mooted for Leverkusen to sell the ex-Manchester United forward.

Burt adds If, as expected, West Ham sign Arnautovic and Hernandez to add to the free transfer of Pablo Zabaleta and loan of Joe Hart it would represent a hugely successful transfer window for the club.