History made one year ago today 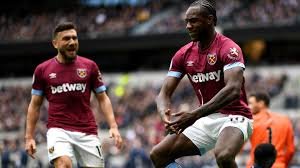 West Ham became the first team in history to beat Spurs at their new stadium one year ago today.

The Hammers became the first team to both score and claim victory at the new home of Tottenham Hotspur on this day in 2019, courtesy of Michail Antonio’s fantastic second-half finish.

Prior to West Ham’s visit to North London on April 27 2019, Spurs had won all four of their matches at the newly developed and opened Tottenham Hotspur Stadium, seeing off Crystal Palace, Huddersfield Town and Brighton & Hove Albion in the Premier League while also beating Manchester City in a Champions League quarter-final first-leg.

With Tottenham scoring eight goals and conceding none against those four games, Manuel Pellegrini’s Irons knew they would need to be at their very best to claim a famous win, and the travelling Hammers were more than up for the challenge their hosts would poise.

Watch the video below to relive the moment.

← Government want to “get football up and running” asap
West Ham Podcast: Fifty-one days without football →
Click Here for Comments >

One comment on “History made one year ago today”