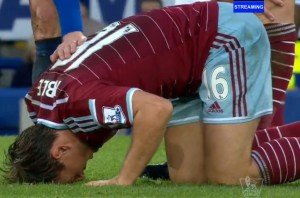 Nobes has been battling all week to shake off the effects that a kick he received on his thigh against Everton last weekend.

At lunchtime we were being told that his chances were no better than fifty/fifty but a training ground source has since told us: “He has a chance.”

The injury looks a bit better and he’s not in quite so much discomfort. Whether he starts or not is uncertain but hopefully he will be in the squad.

That would leave Diafra Sakho, Enner Valencia and Alex song still fighting injury ahead of the game against West Brom at The Hawthorns on Tuesday evening.