How the Irons rated against Chelsea 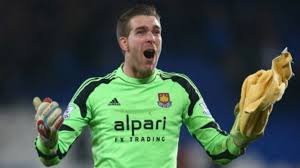 Adrian: Top performance – some great stops – behind a seriously over-stretched defence. No chance with either goal 8

Jenkinson: Some worrying moments especially when allowing Wilian’s ball into to by-pass him for early chance 5

Reid: Under a lot of pressure and like Collins and Jenks left bemused for second goal. Tough day at office 6

Collins: Did well for the most part and was unlucky to fall foul of some poor referring in his battle with Costa. 6

Cresswell: Like everybody else found it tough but always tried to get forward and some decent defending 6

Noble: Ring rusty after recent lay off but grew into it 6

Downing: Switched to the wing in this formation and thus not the impact player we have become used to 6

Nolan: Steady performance in the middle of the park. Played the simple ball. No complaints 6

Carroll: Looks athletic and fit and again defied those who say he’s all about aerial power 6

Valencia: The one threat to Chelsea, carrying the ball out at real pace to prove a real pressure relieving outlet 7

6 comments on “How the Irons rated against Chelsea”